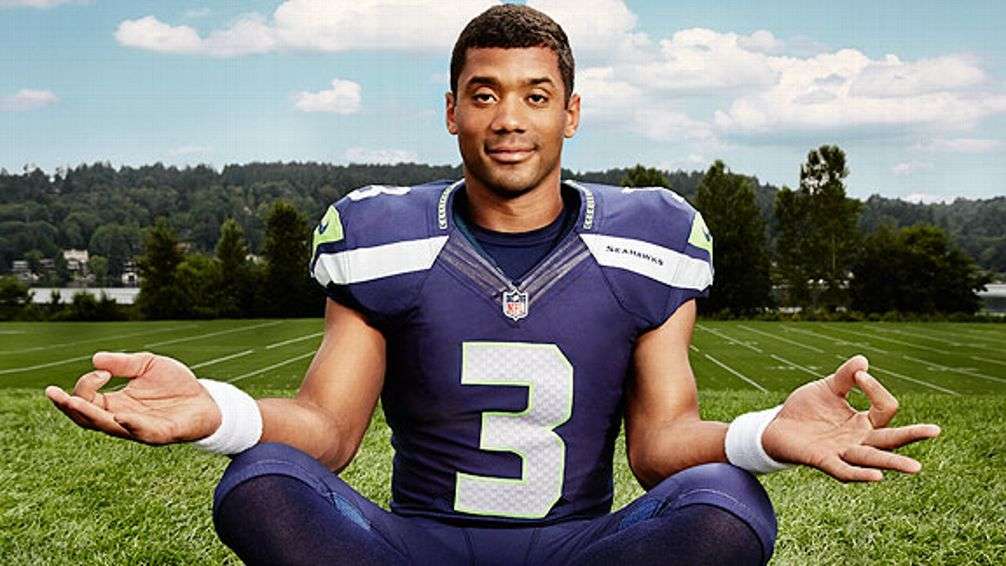 This is the second in a pair of articles published by ESPN regarding the Seattle Seahawks and their use of meditation. This article was published the week after the Seahawks phenomenal Super Bowl win over the Denver Broncos. They went on to win the NFC championship, with a second consecutive Super Bowl appearance, the following season. Mind over matter!

Everybody is always looking for the next frontier in sports. It might be a scientific breakthrough, like a surgical procedure or an undetectable drug to aid recovery. It might be a previously unexplored statistical anomaly that facilitates a strategic innovation. Or maybe this new revolutionary revelation is already staring us straight in the face, wondering why so few are staring back.

Under Pete Carroll, the Seahawks have embarked on an unprecedented quest to merge their bodies and their minds to maximize their potential. It started out as voluntary yoga and meditation sessions. Before long, attendance grew and preconceptions fell. Through the power of group dynamics and old-fashioned results, voluntary yoga became compulsory. The meditation room grew more crowded. Weird became normal. Russell Wilson became such an enthusiastic adherent that he took it beyond the team-issued sessions to hire his own private meditation and mindfulness consultant.

Spring training is starting this week, which means the world’s most mental game will begin another season the way it has for more than a century, with pitchers covering first, hitters working on going the opposite way and nobody spending much time at all closing their eyes and clearing their minds in a Seahawkian attempt to make the most of every moment.

Meditation, yoga, mindfulness — much of it sounds too abstract and New Age to be of much use to anybody but aromatherapists and Buddhist monks. But the same week the Seahawks won, Time magazine came out with a cover story titled “The Mindful Revolution” that broadens the conversation by discussing how corporations like Google, institutions like the Marines and bureaucracies like public-school districts are embracing mindfulness as a means of winnowing distractions and increasing focus among people imprisoned and obsessed by the demands of the digital culture.

It’s a silent revolution. Executives, parents and quarterbacks are trying to find a little quiet time to resist the constant temptations of our electronic devices and reconnect with the present moment. Clearly, we need a governor on our impulses. Everybody’s got to check something right now, whether it’s a score, an email or a Facebook post, at the expense of the people and places inhabiting the same room. A strange byproduct of hand-held ultra-connectivity is a personal distance that keeps us from being truly present at any moment.

Someday, this may be seen as the advent of the post-multitasking era. As the Time story details, we extol the virtues of multitasking while research shows that it decreases productivity. Anyone who has attempted to work — whether that means preparing a presentation, a game plan or a column — while bouncing between the television, email and social media knows the hard truth about multitasking: It saps and diverts creativity. Being a good multitasker often means being a damned good procrastinator.

How does this relate to sports, specifically baseball? Managers talk about distractions as if they were physical presences in every clubhouse. They fret over the impact of the constant media presence around the team. They tamp down expectations, both individual and collective, as if they were runaway campfires. They warn against falling into the trap of responding to the negative influences of social media, where vitriol spews through the fire hose of anonymity.

Managers and executives can tell players to avoid these distractions, but no team has set up an organized system to give them the tools to actually do it, which is what Carroll did in Seattle and what General Mills executives and Pentagon generals have done in their headquarters. This quest for institutional mindfulness seems almost comically well-suited for baseball, where the mental part of the game — this game of failure — is so intrinsic that it’s embedded into some of the game’s most cherished clichés.

“Teams practice every part of the game for six hours a day,” says Alan Jaeger, a Southern California throwing specialist and mental-training consultant for many college programs and professional players. “They claim the game’s 90 percent mental once you get to the big leagues, and yet they never engage in any mental training. If it’s 90 percent of the game, shouldn’t you practice it? What if teams took 10 or 20 minutes out of a six-hour day to teach breathing and relaxation and present-moment ideas to clear away the stressors like batting average and who’s watching from the stands? The first team that makes the connection and does something practical to help their players clear their minds is going to break the dam.”

It’s both confounding and perfectly understandable that baseball is slow to adopt something Jaeger calls “Life 101, and by far the biggest upside for a minimal investment of time and money.” First of all, baseball is the major sport most resistant to change, especially if it arrives in the lotus position. Second, as an institution, it places almost no stock in education. Where else can you find managers of multimillion dollar enterprises with 25 ultra-high-priced employees running the show armed with nothing more than a high school diploma? Where else can you find college programs employing training methods far more cerebral and sophisticated than those at the pinnacle of the sport? With rare exceptions, you find those things only in baseball.

Imagine if an executive could implement a proven way to help a hitter’s atomized world narrow to the present moment — not just every at-bat but every pitch. What if that hitter could train his brain to see every pitch as a discrete event from the last pitch or the last at-bat or every bad moment from his entire season? What if those benefits could extend across the diamond, to the pitcher who has a tendency to dwell on every questionable call, the infielder who frets every misplay, the outfielder who takes his at-bats onto the field? The benefits are incalculable.

Given the follow-the-leader nature of pro sports, it won’t be long before every NFL team will employ a full-time mental coach the same way it employs a special-teams coach. Someday, probably much farther down the line, baseball teams will come to the belated understanding that the brain is a muscle that needs to be exercised and trained just like a throwing arm.

The whole world is turning that direction, so it’ll happen. Give it time. If the military is already on to it, baseball can’t be much more than a decade away. And when it does, we’ll trot out the language of the baseball’s last iconic advancement, and the brain will be touted as the game’s newest market inefficiency.

Read the full article at: www.espn.com/mlb/story/_/id/10432079/keown-brains-need-training-just-bodies